On April 6th 1999 L’Aquila was struck by a devastating earthquake. About 65.000 people became homeless and 308 people were killed. Today the city is still being rebuilt. Work has been going on for the years since the earthquake, with stabilizing damaged buildings the main priority the first years. The bracing can be seen on most of the old buildings in the central parts of town. A lot of work has been done with mostly landmark buildings and some are even finished, but 90% of all work is still remaining to be done. The pace is crippled by both lack of money (many house-owners were not properly insured, and a lot of other were not covered due to force majeure while some just awaits government funding) and laborers skilled to work with earthquake-damaged old buildings. #laquila #earthquake #abruzzo 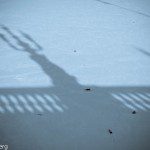